Addicted Self / Healthy Self - Podcast

Addicted Self / Healthy Self

This audio track walks through your session.  It focuses on the sense of self and uses three different templates to deepen this discussion for you.  Greater insight regarding one’s self is key to long-term recovery. 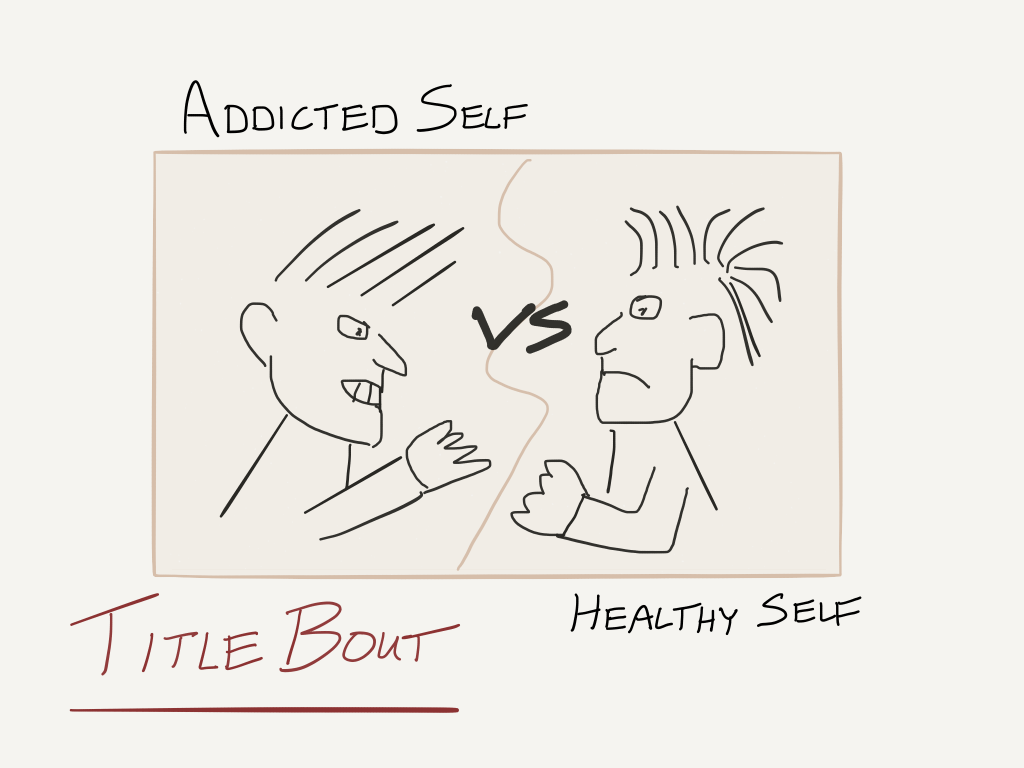 Addicted Self / Healthy Self

Knee deep in your addiction, it’s very possible that you felt really confused.  Who were you?  What had you become?  How could things have gotten to this point?  The nature of these questions is all about desperation, and the desire to have an answer or an explanation to the suffering you’ve been experiencing.  These questions are common amongst those struggling with addiction and we can help by talking through concepts of your identity and sense of self as both a healthy person and amidst your addiction.

A useful way to help work through this confusion is to acknowledge that you have two separate ‘selves’ in your life.  You have an Addicted Self and a Healthy Self.  The addicted self developed over time, involved changes to your brain and distortions in your thinking, and has been dominating things for the worse.  It can be useful to imagine your addicted self as a toxic friend who never really has your back when it counts.  This ‘friend’ will abandon you and overall doesn’t actually love you.  Your healthy self involves a return to your values, an emphasis on healthy relationships and connections, and a sense of hope.

To further this point, let’s list some of the different language each of your ‘selves’ may speak:

“You don’t understand me”

“I don’t ever want to use drugs again”  (This one’s tricky in that it sounds great, but is missing a deeper awareness that the ‘desire’ to still use drugs can be there for a long time)

“I don’t think I need my medication anymore, I’ve changed”  (Also tricky!  If you take relapse-prevention medication, how much benefit are you getting from it these days?  Maybe a lot…)

“I don’t feel very good about myself these days”

“I want to get better”

By understanding the duality present in the brain, you can be better prepared.  Relapse is a common part of the addiction cycle, so don’t get discouraged if you have one.  Try to learn from things and how they unfold.  A common path back to drug use is neglecting the power of the addicted self and listening to it over the healthy self.

To better explore this topic in yourself, turn to a close person in your life and ask them what they think.  Because of the deception involved, it can be helpful to get feedback from someone outside of your head.  The trick with this, though, is to embrace your healthy self and have an open mind to that feedback!

Origins of Self Duality

The first clinician and writer who elaborated on the concept of dual selves was Carl Jung in his writings about the persona and the shadow.  His depiction of this duality was that the persona represented the outwardly visible self, though only a portion of the total identity.  This persona could change based on context and function in a socially adaptive way.  It was portrayed consciously in that the person held a fair amount of awareness of this persona, the rationale behind it, and some ability to modulate it.

The shadow represented the remaining part of the total self which was not visible to the outside world.  There was some speculation by Jung and additional authors that the shadow itself could be partitioned into a conscious and unconscious “hidden self.”  In this explanation, the unconscious components of the shadow were not fully visible to the person and could wreak havoc on interpersonal levels.  It would often carry themes of guilt and difficult emotional states such as envy and sadism.  Jung did also write that the shadow held intrinsically good, though primal, drives.  It was not entirely a source of unconscious mayhem.

One of the core psychotherapy goals for patients in treatment is awareness and insight-building.  From a pure analytic standpoint, the goals were not to change the course of such shadow drives, but rather to understand their existence in a hope of preventing ‘acting-out’ behaviors or other such patterns attributable to the shadow.  Such behaviors would lead to serious life consequences.

Through awareness of the internal processes, a person could effectively live while tolerating such drives and not acting them through.  The ideal example of this phenomenon with recovery involves the fantasy of drug use.  Stable recovery tends to acknowledge the drug-using fantasy while holding enough commitment to prevent, through life structuring and refusal skills, the acting-upon of the fantasy.

Jung’s Depiction of the ‘Self’ 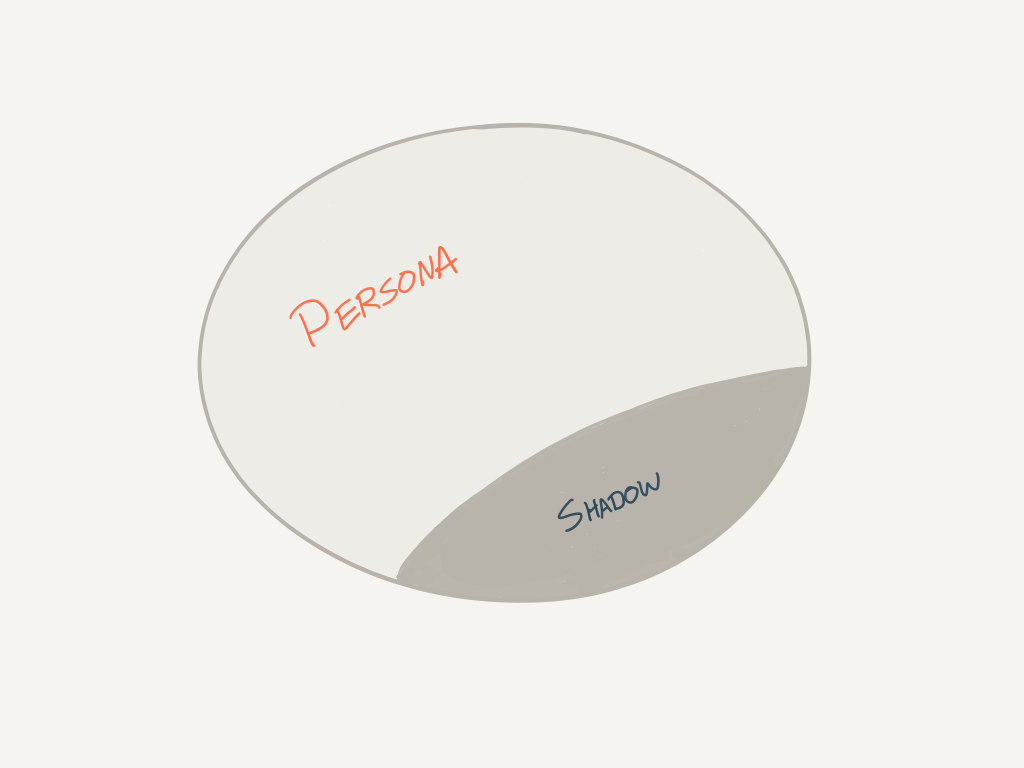 More advanced therapeutic exercises can be developed upon Jung’s shadow principle.  Developed in 1955 by two psychologists, Joseph Luft and Harrington Ingham, the Johari Window was a 4-quadrant depiction of what Jung had first designed. 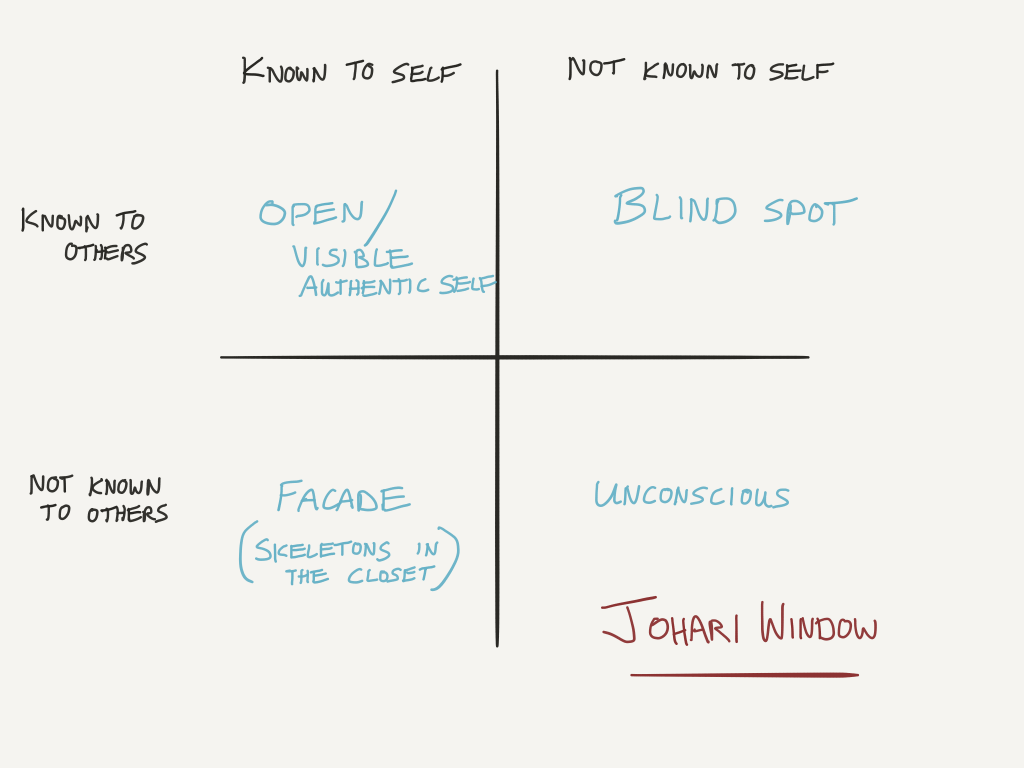 We will use the Johari window exercise in group therapy sessions as a way of building greater insight into sense of self.  Some of the unknown frames may be difficult to answer at first, but can be explored over time either through continuous self-reflection or in a therapy context.

Spend some time reflecting on how you see yourself.  Addicted Self / Healthy Self, Jung’s Shadow, and the Johari Window are all potential frameworks for you to use when exploring this topic.  This is wonderful material to talk through with a therapist or sponsor.  One could make a case that the understanding and embracing of your true self is the most powerful therapeutic goal of all.